Spinel Town, located in the Chrysolia Region and situated next to the Chrysolia Forest and Tanzan Mountain, is first accessible after obtaining the Venom Badge.

The player first has access to Spinel Town after leaving the Railcave when Charlotte asks the player to buy medicine for Anna. When the player attempts to enter the PokéMart, it will be teleported to the roof of the Voclain Estate.

Outside the gym, the player will encounter Bennett for the first time. Bennett will inform Serra that a PokéMart has been teleported on top of their house.

A large museum dedicated to ancient history, with multiple exhibits for the player to enjoy. This place also serves as the location where players can revive fossils they've excavated or found into Pokémon.

The sixth gym the player challenges, run by Serra.

In one of the houses, there will be a girl with a Kadabra. When the player enters the house for the first time, all of the furniture will disappear. The girl will then request the player to help her find her missing furniture.

When you return to the girl after finding all her furniture, she will tell you that the cabinet isn't hers but ultimately doesn't care. She will then gift the player the Exp. All.

If you are playing on a savefile where you received the Exp. Share from this sidequest, simply returning to the lady will give you the Exp. All. The Exp. Share has since been moved to here.

There will be a girl sitting on a bench outside the Pokémon Center who only appears during clear weather. When the player talks to her she will be teleported away. The player will be able to find her inside the Chrysolia Forest but she broke her leg. She requests the player to help her get some medicine. Once the player gives her the medicine, she will head back to the town.

When the player speaks to her again in the town, she will thank the player and award the player a Department Store Sticker.

Sharing is Caring... About Eevee!

A girl in the house south of the museum asks you to find and pet all 8 Eeveelutions in her stead. There's a catch, however: they can't be yours! This sidequest has the player scouting the entire overworld of the Reborn region for the best kind of Pokémon to find and give all of the pats.

Returning to the girl once you've pet all 8 Eeveelutions awards you a Choice Scarf and a password that enables Eevee to be picked as a starter.

In the apartment building to the left of the Museum, is a Nerd who will offer to backtrade any Shelmets or Karrablasts you come across. 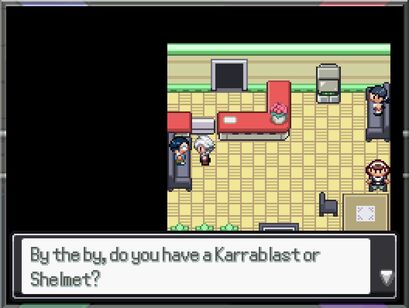 When the player first enters Spinel Town, the Pokémart will disappear upon being approached and reappear on top of Spinel's Gym. After beating Serra, it will teleport again, this time to the outskirts of Chrysolia Forest, the Railnet, and Tanzan mountain.

McKrezzy is battled in a Single Battle format.

McKrezzy gives the player TM15 Hyper Beam after defeating him in battle.