The Salon is the first building you'll see upon entering the Obsidia Ward. Employees here greatly care about Pokémon's happiness, and they know a lot about it, too-One employee can tell you how much your Pokémon likes you, and another will give you a Soothe Bell if you've raised your Pokémon to be happy enough to satisfy her. She no longer gives a Vulpix. A third employee will groom your Pokémon for

1500 once per day, which raises its happiness. 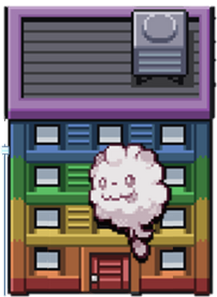 In the back of the store is a vending machine. A child stares longingly at it, penniless for her greatest desire-Chocolate Ice Cream. If you give her some, she'll happily thank you for it and leave to eat it outside, giving you access to the vending machine. Occassionally a Blue Moon Ice Cream will drop for free after several consecutive cones have been bought, every 40-50 cones it should drop one

The Other Side[edit | edit source]

A women is concerned for her boyfriend who got swallowed up by the earthquakes, find him in the underground railnet after you clear out the train with the others and she will give you a department store sticker

As they approach the center of the park, they see a terrible sight: Amaria and Florinia have been captured by a Tangrowth attached to some ghastly machine-and worse, a member of Team Meteor stands in front of it! The member introduces themselves as ZEL-three times, in fact. They explain that the machine is the source of all the damage throughout the town, amplifying Tangrowth's power so it can make mass weapons out of even the smallest root! They dare the player to attempt to stop it, and battle them using the Tangrowth, still hooked up to the machine and using it almost like a Mega Stone. After the threat has passed, Amaria and Florinia agree that there is more to the situation than realized, and head their separate ways.

After getting Cut, the alleyway near the entrance from the Opal Ward is now accessible. The alleyway holds a few hidden items, different wild Pokémon, and a few Special Encounters.

The Yureyu Building is an abandoned building accessible after obtaining the Venom Badge from Aya.

The Madame Meganium's Magic Medicine Market is a mart operated by a Meganium, and only accessible after the city has been rebuilt.

Note: you must do the main story quest involving Devon corp first before you can do it. you can initiate it if you want. but you must continue the main story to complete it.

To trigger this quest. You must first head to the jasper ward into Rhodocrine Jungle. then enter Kecleon Cave (previously one one of the caves where a missing cop was located). you will See a Treecko in a cage. However there is an "unseeable object" blocking your path. soon all of the Jasper ward is filled with them. Then enter Silph CO's Branch Headquarters and talk with the green haired woman. she will ask the player to enter Devon Corp building and find the Devon Scope.

Talk to the lady again and she will give you the Silvon Scope. Later return to the Kecleon Cave and battle all the kecleons.

you will receive a Treecko and a TM33 Reflect.

The Sweetest of Rewards[edit | edit source]

Swirlix can be won from the contest in the Sweet Kiss Candy Shop. This can be done multiple times, and Swirlix beyond the first one will have Belly Drum Egg Move.

In a house near Pokémon Center, a girl will trade her Castform for a Furret.

This isn't what I paid for![edit | edit source]

Beginning in the South Obsidia Ward, this is a hide-and-seek quest similar to the Teddiursa Chase. However, this Lillipup has much more stamina, and can be found in more wards!

During clear daytime, a Spoink can be found on the path from the Coral Ward to the Obsidia Ward. After interacting with it, it will take off for a storage unit in the Coral Ward.

Blossoming in the sun[edit | edit source]

During sunny morning and daytime, Petilil can be found in the Obsidia Park, and will join the player if they have PokeSnax.

An addition/subtraction to your team[edit | edit source]

In a small space in the alley lives a family of Plusle and Minun. A member of the family will investigate the player, and if they have PokeSnax, join them. The Pokemon will know either Wish or Sing, an Egg Move. To get the other one, the player has to exit and reenter alley until it appears.

In the very back of the alley (at night), a pair of stray Mightyenas are ganging up on an Electrike. After defeating them, Electrike will wish to join your party, but will disappear if refused. Electrike knows a random Egg Move (Crunch, Flame Burst or Ice Fang)

Note: Similar to the Scraggang battle, these Pokémon cannot be caught.

There is a Litleo eating in the alleyway that will run off when approached by the player. The Litleo can then be found hiding in the house west of the pokemon center, but will again bolt at the sight of the player, running downstairs into the east Railnet Entrance. As the player corners them, a level 35 Klinglang descends from the ceiling and attacks. After defeating the Mechanightmare, Litleo will join your party.

If the player brings Glamzonia Salon's Glameow to Central Salon's groomer, she will fight you. If you win this fight, you will receive a Bounsweet with Play Rough and Synthesis.

Retrieved from "https://pokemon-reborn.fandom.com/wiki/Obsidia_Ward?oldid=17833"
Community content is available under CC-BY-SA unless otherwise noted.