Adieu to disappointment and spleen. 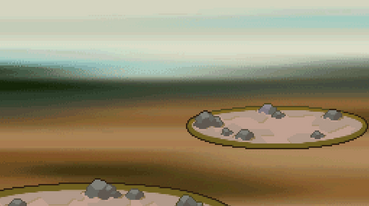 Mountain is one of the field effects. It appears constantly in Beryl Cemetery and sometimes in Route 4 and Route 2.

The Field Notes for Mountain can be found in Teknite Ridge.

A Snowy Mountain will transform into this terrain if any of these moves are used:

The mountain strengthened the attack! (Rock)

Moves with a 1.5x increase in base power

When Strong Winds are active, all Special Flying type attacks get boosted by an additional 1.5x, as well as the following moves:

This field will transform into a Snowy Mountain if Hail has been in effect for three consecutive turns, or if the moves Blizzard or Subzero Slammer are used.