The Lapis Ward is the northernnmost Ward of Reborn City and the eight and final Ward the Player passes through on their journey through the Reborn Region. It is the location of Dr. Connal's Orphanage, the Lapis Alleyway, the Lapis Gym, and 7th Street.

The Lapis Gym is the third Gym the Player will challenge in the Reborn League. It is led by the shy Bug-type trainer Shelly.

Dr. Connal's Orphanage, operated by Dr. Sigmund Connal, is where all the orphans in Reborn City are kept until they are of age.

A street that was built over when Reborn City was being constructed, now a shady black-market area run by gangs. Can be accessed after defeating Radomus.

The Lapis Alleyway, located east of the Orphanage, is home to the Aqua Gang Hideout.

If the Player wants to join the Aqua Gang, they will first have to go through a trial, a battle with two members. If the player defeats the two aqua members, they will welcome the player into the Aqua Gang. The player will then complete certain quests throughout the game that lead to the accessing of 7th Street.

Located in the northwest of the Ward, it contains several clerks selling items such as various Nectars for Oricorio, Honey, Floral Charms, etc. There is also a woman that will give you a Wailmer Pail and another will offer you a Pokémon if you can solve a puzzle.

In the apartment building west of the Lapis Gym, there is a man that will teach Fire Pledge, Water Pledge, or Grass Pledge to your Pokémon in exchange for a one-time payment of three red, blue, or green shards respectively.

The best Bicycle shop in the city, the shop sells bicycles for

A lady in one of the houses claims that her child has gone missing and requests the player to help her find him. The child can be found outside the Abandoned Power Plant during Windy Weather being intimidated by a Drifloon. After defeating the wild Drifloon, return to the lady and her son will still be missing. You will find the child in the Jasper Ward, cornered by a Swarm of Venipede led by a Scolipede. Defeat the Swarm and the child will reach his home safely. Talk to the lady after rescuing her child and she will reward the player a Department Store Sticker.

In Sweet Scent Flower Shop, there is a woman who will offer you a Spritzee as part of a promotion if you can solve a puzzle similar to the one in the Sweet Kiss Candy Shop in the Obsidia Ward. Spritzee will know Wish as its Egg Move. The puzzle solution: 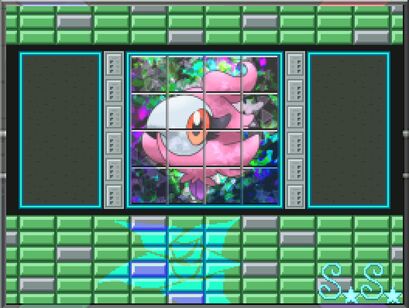 After finishing the first Magma or Aqua mission, depending on the player's gang, the player will obtain a Buizel or a Ponyta inside Ms. Craudburry's back room.

Cal is battled in a Single Battle format and he has two Hyper Potions.

Cal is battled on a Super-heated Field in a Single Battle format and he has two Hyper Potions.