In the small B2 room, accessible by taking the B3 tunnel leading back to B1, there's a static Solrock or Lunatone the player can fight and catch. The one not found under the Grand Stairway can be found later in Tanzan Mountain. 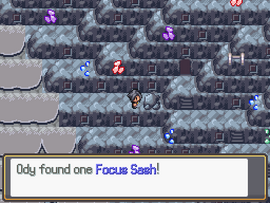 Retrieved from "https://pokemon-reborn.fandom.com/wiki/Grand_Stairway?oldid=12439"
Community content is available under CC-BY-SA unless otherwise noted.