Fern Sevilla is the younger brother of Florinia and a specialist of Grass-types. He is also the Grass reserve leader in Reborn and is considered one of the player's rivals, along with Cain and Victoria.

Fern is a boastful narcissist who consistently insults and belittles other characters, including his sister, Florinia, and especially the player. He is confident to the point of arrogance, unwilling to admit any flaws or shortcomings. While Fern is dislikeable to about everyone in Reborn, he seems to be aware of his own attitude but hasn't done anything to change it.

He is first encountered outside a factory in the Peridot Ward, where he's certain he's right about the meeting place and, after realizing he was wrong, is certain it wasn't his fault. Shortly afterwards, he meets up with the player and Julia in front of the Mosswater Factory along with his sister. He attempts to be slightly more polite, but Julia's reaction to him makes it clear he can't keep the act up long, and he drops it right after entering. After entering the factory, Florinia suggests that, to work towards both learning more about Team Meteor and working to stop the factory's pollution, the group split up, and the player is stuck with Fern, who often makes snarky comments on the way through.

Fern later appears in the Onyx Ward, determined to stop the player from challenging his sister, declaring them "not worthy". He blocks the entrance to the Onyx Trainer's School and orders students to attempt to keep the player out, to defend their pride. Many students remark that they're worried about what Fern will do to them when he finds out they have failed. Fern continues his large-scale bullying by blocking the entrance to Florinia personally, claiming he is stopping the player from embarrassing themselves by even attempting to battle Florinia. "It's simple, really: You're a loser." After yet another defeat, he decides to take on the Reborn league, to attempt to show the player up.

During the player's attempts to prevent the Pulse Machines running amok in the Jasper Ward and Beryl Ward the player will once again encounter Fern while exploring the Rhodochrine Jungle neighboring the latter ward. They will do so after being falling into a pitfall and being imprisoned by some wild Nuzleaf. Fern will laugh at the player for being caught but will offer to let the player out if they beg and admit Fern is a better trainer. The player can refuse this though and Fern will simply leave the player locked in the cage - which isn't really that much of an issue since Taka's Chatot will let them out after walking around in the cage for a while.

After this, the player will encounter Fern atop Beryl Bridge once the player has witnessed Corey - Reborn's Main Poison Gym Leader - fall off the bridge and into the Lapis Ward below. Fern will then bad-mouth and insult Corey for committing suicide and wasting his time coming to the Beryl Ward, using the excuse of not caring as life is only about the survival of the fittest and not personally knowing Corey - or his family. However, before he leaves an explosion goes off in the North Obsidia Ward and he mentions that he plans to investigate.

The next time the player sees Fern is when they go to the Grand Hall to report Corey's death and ask about the reserve leader. Once they arrive, Fern tells them that he has already informed Ame and that the player will require a certain key to enter the Byxbysion Wasteland where the reserve leader resides. He explains that when a gym leader retires, a back-up leader will take over. He gives an example that if Florina retires, Fern would take over for her since he is the reserve Grass-type leader for Reborn. Fern then offers to tell them how to get a key in exchange for a battle. Upon winning, Fern tells them they need to find the Poison Leader's brother (Cain) who he describes as "A real fruity lookin' guy. Decked out in purple, fishnets, looks more like a girl."

The player will not encounter Fern again until they arrive at The Wasteland Hideout - Aya's Gym in the Byxbysion Wasteland. Once the player does arrive they end up arriving just as Fern takes down Aya himself. However, it seems Fern still has energy to go as he challenges the player, after gloating over how much of a pushover Aya is. This battle is just ever so slightly held up though as, the Rock Type Gym Leader, Hardy arrives as he had intended to come over to welcome Aya to the league. Hardy then spectates as the player battles Fern and Aya goes to heal her pokemon. Once the player does beat Fern, he stays to spectate Aya's match and leaves once the player wins.

At this point, the player will find their encounters with Fern to begin occurring less and less - whether they see that as a good or bad thing is up to them. Regardless the player will next run into Fern at Route 1 where they once again battle. He also informs the player that there is a Gym within a castle at the east end of the route and that the guards to the northern exit are stuck sleeping forever before heading off to find the Normal Type Gym Leader.

Fern is then not seen again until the player reaches Calcenon City, where they find Fern to actually have sided with Team Meteor when he appears on their side of the barrier that is currently separating Calcenon City and Labradorra City. When he speaks to the player, Hardy, and Saphira - who are all present on the opposite side - he explains that the reason he joined Team Meteor is simple - he's just siding with the winners. He also taunts and torments Hardy over the fact that Team Meteor currently holds Aya captive.

The final encounter with Fern as of the end of Episode 18 is at the Fiore Mansion. This is when Team Meteor attacks the mansion in an attempt to steal the Sapphire Bracelet in Amaria's possession. Team Meteor will then try and trick the player and Florinia to hand over the bracelet for Fern's life until Florinia denies the offer. The player will then battle Fern in a double battle against him and Blake with Florinia as their partner. Once this battle is over and depending on if the player won against Solaris at Pyrous Mountain, Fern will proceed to argue and insult Florinia saying things like "You really are dead inside" "You're just weak, so you hide from yourself" and "I have no sister anymore" which throws her off guard and allows Sirius to knock her out before Julia intervenes. Once he has finished insulting her Fern leaves.

During the void sequence in the Glass Workstation, the player finds Fern back in the Onyx Trainer School, however his speech is slightly different from before. He says "Not even I was good enough" and that the player is worthy while he never was.

Fern is battled in a Single Battle format and he has one Potion.

Fern is your partner during the raid of Mosswater Factory.

Fern is battled on a Wasteland Field in a Single Battle format and he has two Chocolate Ice Creams.

Fern is battled on a Grassy Field in a Single Battle format and he has two Strawberry Ice Creams.

Fern is battled alongside Blake in Double Battle format. You fight alongside Florinia. 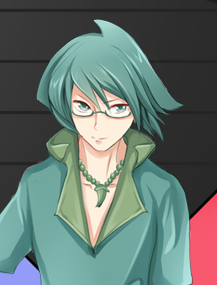