The cave is littered with crystals. 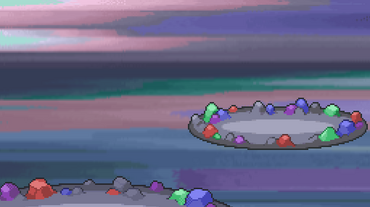 Crystal Cavern is one of the Field Effects. It appears constantly in the Grand Stairway, Citae Arc-d'Astrae Aerie, and Iolia Valley in the lighter areas.

Moves with a 1.3x increase in power

Moves with a 1.5x increase in power

This terrain will transform into a Dark Crystal Cavern if Dark Pulse, Dark Void, Night Daze, or Light that Burns the Sky are used.

The crystals were broken up!

This terrain will transform into a cave if Magnitude, Earthquake, Bulldoze, or Tectonic Rage are used.

The Magical Seed boosts Special Attack and applies Magic Coat to the user.