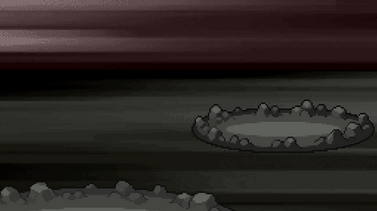 Cave is one of the Field Effects. As expected, it appears in any location that resembles a cave, including the Underground Railnet, Tanzan Depths and caves located in the Rhodocrine Jungle.

A Dragon's Den will transform into this field if Glaciate, Hydro Vortex, or Subzero Slammer is used, or if Muddy Water, Sparkling Aria, Surf, or Oceanic Operetta are used twice.

Bits of rock fell from the crumbling ceiling! (first use)

The quake collapsed the ceiling! (second use)

After two uses of Earthquake, Magnitude, Bulldoze, Tectonic Rage, or Continental Crush, the cave will collapse. All Pokémon on the field will lose all of their HP, save for the following conditions:

Power Gem and Diamond Storm transform this terrain into a Crystal Cavern.

The Telluric Seed boosts Defense and damages the user with Stealth Rocks.