I don't go down without a fight, or at least some sweet talk first.

Cain LaRue is a boy from the Byxbysion Wasteland, where he lived with his mother and his older sister Aya.

A specialist of Poison-type Pokemon, Cain is considered one of the player's rivals, along with Victoria and Fern, and he assists the player and the other protagonists on various occasions in the storyline.

Cain is first met at the Grand Hall, shortly after the player has chosen their starter Pokemon, and he will flirt with the player - regardless of the player's chosen gender - before challenging them to their first battle, after which Cain happily takes it upon himself to show the player around the Grand Hall. He then leaves the player to speak with Ame while the player battles Victoria. After the battle, Cain informs the player and Victoria that they can speak to Ame to get their basic starting gear (Pokeballs, Running Shoes, Etc.) and leaves.

Cain is not encountered again until the player reaches the Coral Ward. Here, Cain arrives just in time to help Amaria save a Popplio (Oshawott prior to Episode 17) stranded up in the water. Sending his Grimer (Which is an Alolan Grimer from Episode 17 onwards) to safely navigate the poisonous waters (and singing a heroic song all the while), Cain manages to rescue the Popplio/Oshawott. At first, Cain is content to just head on his way, but when the Popplio/Oshawott continues to follow him, Cain gives into its adorable appearance and adds it to his team, despite his initial reluctance towards using a Pokemon that is not a Poison-type, and has a battle using it against the player to calm its jitters.

The player's 3rd encounter with Cain is after beating Shelly as the player has to go to inform Ame that they need to get ahold of Reborn's backup Poison leader in Byxbysion Wasteland, only to find that A: Fern beat them to it + B: The player needs to find Cain who has the key to enter. The player will then find Cain at the Beryl Ward - More specifically at the cemetery east of the gym - where he is paying respects to Corey (The previous Poison leader) and decides to let the player have the key if they beat him in a battle. However, once the battle is over, the player will learn that Cain is going to attempt to keep an eye on Corey's daughter - Heather - but it turns out that she overheard their conversation. She then argues with Cain about being old enough to take care of herself before she runs off to find Shelly in the Lapis Ward.

Cain and the player then follow Heather to Shelly's gym where Heather is trying to get Shelly to agree that she doesn't need help from any adults. Shelly doesn't feel comfortable being put in between her friends' opinions and doing the right thing though, causing Heather to feel betrayed and storm out with Cain, the player, and Shelly on not far behind. Things take a turn for the worse though as Heather runs into Dr.Connal who runs the Lapis Ward Orphanage, where he uses the law to get everyone else to back off and to take Heather into the orphanage.

The trio returns to Shelly's gym after realizing they'd be breaking the law by opposing Dr.Connal and are stuck wondering what to do now. This contemplative moment is cut off though as they hear screams from the orphanage that belong to Heather. Hearing this the trio decides to break into the orphanage and get Heather out - regardless of the consequences. It is here that the player, Cain, Shelly, and three of the orphans already within the orphanage - Charlotte, Anna, and Noel - decide to rescue Heather and escape.

Cain and Shelly then guide the group to the underground rail net where they plan to escape from Reborn city to where Charlotte used to live with her sisters - Saphira and Laura - in the Chrysolia region. Unfortunately, the player has to beat Shade, Reborn's Ghost Type Leader, to re-power the gate so they can all escape and splits from Cain and the group.

Once the player does beat Shade the gate opens, only for the ghost type leader to show on the rail net cameras that Team Meteor - who has now teamed up with Dr.Connal - captured everyone except Cain in an ambush. However, Cain has to destroy the path to the gate with his Nidoking and the only other way out requires Strength - which neither Cain nor the player has. The player then follows Cain to get the TMX for Strength from Kiki, Reborn's Fighting Type Leader, but Cain uses his Muk to cross the toxic waters of Azurine Lake and leaves the player behind to catch up, however they can.

The next time the player does see Cain is shortly after beating Kiki. Victoria states that he never showed up to the island while the player was trying to find their own way across. As such the player goes to Azurine Island as it is the only place he could be. Once the player does arrive at Azurine they find Cain's earring on the ground which lets the player know he is, in fact, on the island somewhere. The player then finds out that Taka - one of Team Meteor's admins - is holding him prisoner after they find a Team Meteor base on the island. Taka then reveals to both of them they are going to use a Pulse Camerupt to make Pyrous Mountain erupt and wipe out those that inhabit Apophyll Academy.

Cain later reveals that he was originally supposed to be the back-up leader for the Venom Badge, but because of his disagreement with his mother over his sexuality, he ran away from home, leaving Aya with this role instead.

Cain is battled in a Single Battle format.

Cain is battled on a Misty Field in a Single Battle format and he has two Potions.

Cain is battled on a Mountain field in a Single Battle format and he has two Super Potions.

Cain is battled in a Single Battle format and he has two Chocolate Ice Creams.

Cain is your partner when you go through the old Yureyu Building.

Cain is battled on a Chess Board in a Single Battle format and he has two Moomoo Milks.

Cain is battled on a Factory Field in a Double Battle format alongside Shelly. 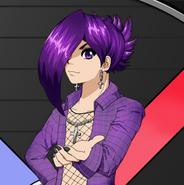 Add a photo to this gallery

Retrieved from "https://pokemon-reborn.fandom.com/wiki/Cain?oldid=14376"
Community content is available under CC-BY-SA unless otherwise noted.