The field is ablaze! 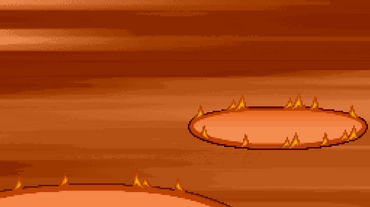 Burning Field is one of the Field Effects.

The Field Notes on Burning Field can be found in Route 4.

Transitions from other Field Effects

It can be summoned by combining Fire Pledge and Grass Pledge.

A Forest Field, Grassy Field, Superheated Field, or Flower Garden (Level 3 and above) will transform into this terrain in the absence of rain or Water Sport if any of these moves are used:

The blaze amplified the attack! (Fire)

The blaze softened the attack... (Grass and Ice)

The Pokémon were burned by the field!

The blazing field causes each grounded non-Fire-type Pokémon on it to take type-scaling Fire damage at the end of each turn, similar to Stealth Rock. Pokémon in an Aqua Ring are immune to the damage.

Abilities that make the bearer immune to the Blazing Field

Transitions to other Field Effects

The Elemental Seed boosts Sp.Atk, Atk, and Speed and applies Fire Spin to the user